I have finished a few little things this week, but they have not been well-documented...so far.  One project that I managed to complete was the sewing of a sun hat (yes, I am optimistic that spring has sprung, or will do so soon) for Miss F.

My first attempt was a flop...not "floppy" but a real flop.  I can't even be bothered to photograph it, but I will send out a warning to anyone planning to sew Butterick 5056: option A (top RH corner in the mosaic below) is drafted terribly.  Maybe there's a reason why they didn't show it on a real live baby! 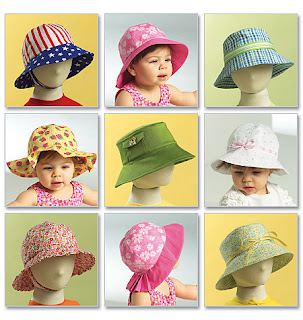 The hat came out super-duper shallow -- it might work for an infant Frankenstein (or so says My Loving Husband, who knew that this first hat was oh-so-wrong and that he would be viewing as many hat-attempts as it took to get this right!).

The only good thing to come from this failed object is that I got the method down pat.

My next two attempts used the bucket hat pattern from the pretty new book by Liesl Gibson (of Oliver + S fame), Little Things to Sew.  I had pre-ordered this book, and luckily I made a mental note of the reversible hat featured in it.  So here it is, hat #2 in two colourways of a print from Anna Maria Horner: 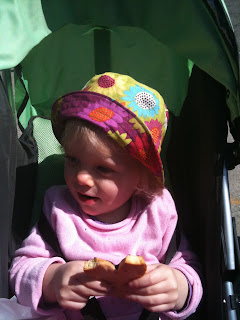 It has barely left Miss F's head, but I will try to get a better photo of it soon.  In the meantime, I'm happy to report that the pattern is great, the instructions are well-written (as they always are from Ms. Gibson...I love her patterns!).  The only tricky step is the handsewing/slip-stitching of the second fabric "bucket" to the brim.  For some reason, this step was a snap on hat number #2, but didn't go so smoothly on hat #3.  We're just going to call that one a "lined hat" rather than a reversible one.  Photos of that soon....
Posted by Prof. S (the enchanted bobbin) at 2:04 PM

What a sweet sweet hat! For an even sweeter girl!!

So cute. I saw your link on Made by Rae and wanted to check out your hat. I love the fabric you used. I made two of the hats as well and I actually skipped the slip-stitching ... I top-stitched from the outside instead, catching the lining up in it. It looks fine. I try to avoid hand sewing at any cost! :)

I'm heading over to your blog, Randi, to see how your hats turned out!! And I should get a photo of my 2nd (pink piggy) version of the hat...I'll put that on the to-do list!

Thanks for your comment. I didn't find the hat shallow but my kids have heads on the smaller side and maybe that's why. Hats always tend to run a bit big for them.