I started teaching myself to quilt on a Kenmore sewing machine -- and even though she ended up in the closet a year later (when I fell for the Janome Horizon...sigh...) I still feel very affectionately towards that first machine. I have read that the Kenmore-labelled machines are actually made by Janome, but whoever is responsible for the design of that machine should be praised: it has a good manual and is also very well labelled (on the machine itself), making it relatively easy to thread, wind bobbins, switch stitches and all the other things that eventually feel like second nature.

Well, the Kenmore had been in the closet too long -- and now she finally has a new home, in a small city about an hour from here, with my friend Miriam's family...most especially her son E.

Miriam is like an honorary sister to me, which makes her two boys honorary nephews. Close in age, the boys have very distinct personalities and talents: I'm absolutely certain that each of them will discover new areas of interest as they head into adolescence -- so I don't want to pigeonhole them -- but I think it's fair to say that E looks at the world like a scientist, or maybe an engineer (always busy building, making and unmaking) and his brother is both a great observer of social dynamics and a great athlete.  They're wonderful boys.

Over the weekend I gave E his first lesson on the Kenmore.  I showed him how to unscrew the plate, remove the bobbin housing, and clean out the lint.  We wound a couple of bobbins.  We threaded the machine.  He sewed lots of straight lines.  He tried out the zig-zag, stretch stitches, and the three decorative stitches.  He stretched the decorative stitches, first in length and then in width.  We made a buttonhole.

And then off he went, with the machine and a few scraps to play with.

E is the kind of person who only needs to be shown the workings of a machine once, and then he's got it.  He's been busy turning my scraps into useful items, and I can hardly wait to see what he makes in the coming weeks! 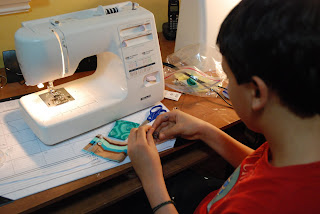 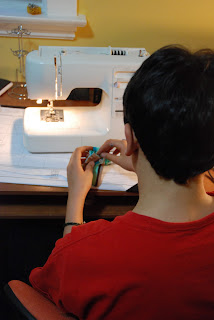 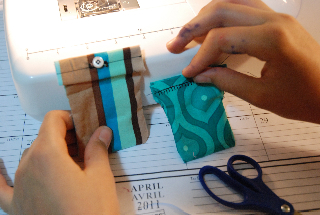 I love to see children learning to sew!! My own son paid no attention to my sewing so I'm hoping to work on my little great-nieces and nephew:-)

Your Kenmore will most probably enjoy the workout too!!

What a lovely post! E is gifted in so many areas. It really will be interesting to see where he goes with this....

I agree with Maxine, this is a lovely post! E and I like it too! And E already made cell phone holder/pouch that he embroidered his initials on using the machine...his latest project. I will send pics soon...lets see what he cooks up this long weekend...

What a great home for your old machine, so great to see it used and what a great skill for him to have, he'll be able to cusomize his clothes! Thankyou for your really lovely and thoughtful comment by the way, very much appreciated x