...and then there were two

Early in the summer I had a total of 3 quilts awaiting basting, quilting, and binding...and now I have just two, since I FINISHED (yay!) the gift for my mum.  I'm calling it "In Bloom," which references a little song about spring that my mother sang to me when I was a little girl.  She's guaranteed to catch the reference :) 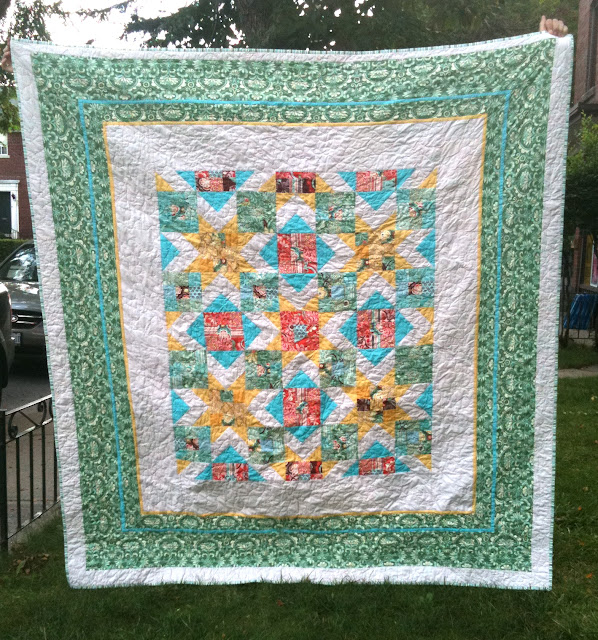 Based on Corey Yoder/Little Miss Shabby's "Sunny Trails", this project took several detours before it was complete.  I decided to work with 9-patch blocks -- to make the most of my prints -- rather than the 16-patch squares featured in Corey's pattern.  This really messed up the construction as laid out in the original pattern...so it was a bit of a mind-twister to develop an alternative means of construction. I didn't document the quilt-top-in-process, but if anyone happens to face the same dilemma in adapting Corey's sweet design, please feel free to contact me!

I was inspired by a Moda scrap bag I bought last winter at Fabric Shack in Portland. I have bought four of these scrap bags over the past 18 months, and the contents are sometimes a surprise.  For instance, the very first one I bought showed a nice little piece of "Fandango" -- the brown medallion print -- but turned out to contain 99% of another line, less to my liking, and which will remain nameless.  So when I spotted another scrap bag with Fandango in its window, I was a little wary -- but took a chance.  I'm so happy I did, because for less than $10 (there was a sale!) I added a nice collection of Fandango prints to my stash.  Everything in this quilt was built around those scraps.

The solids feature two of my mother's favourite colours -- yellow and turquoise.

I stretched my prints as far as I could, but still had quite a ways to go to make this a full bed-sized quilt.  Every last scrap of natural solid in my stash and several additional yards of a Fandango print purchased specifically for this project helped me there.  I don't usually add borders to my quilts, but in  this case I really like the way that one Fandango print looks in large expanses. I worked in narrow borders of the yellow and the turquoise. 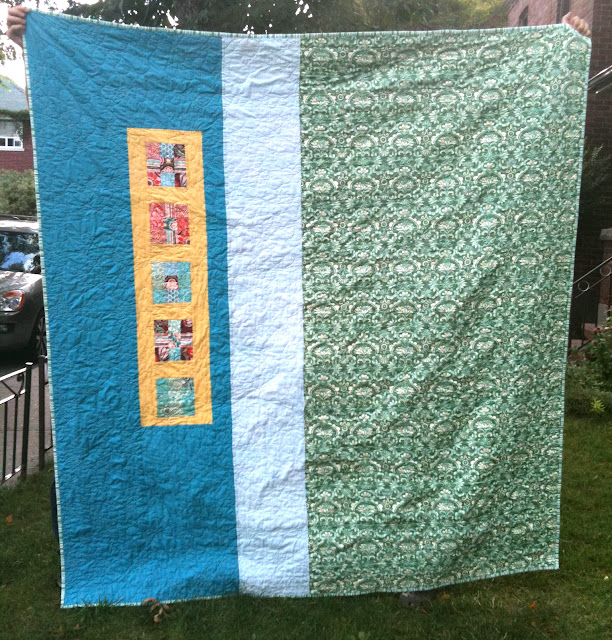 The back is pieced from the remaining yardgae of Fandango, a deep(er) turquoise solid than that used on the front (from Connecting Threads, I believe) and some pale blue Kaffe Fassett shot cotton.  I also worked in some of the leftover 9-patch blocks and what remained of the yellow solid.  Binding is a Fandango stripe in the same range of greens as the border print.
The whole thing is free motion quilted in white, with large, loose meandering in the central panel and some flowers of various sizes on meandering vines in the outer borders. 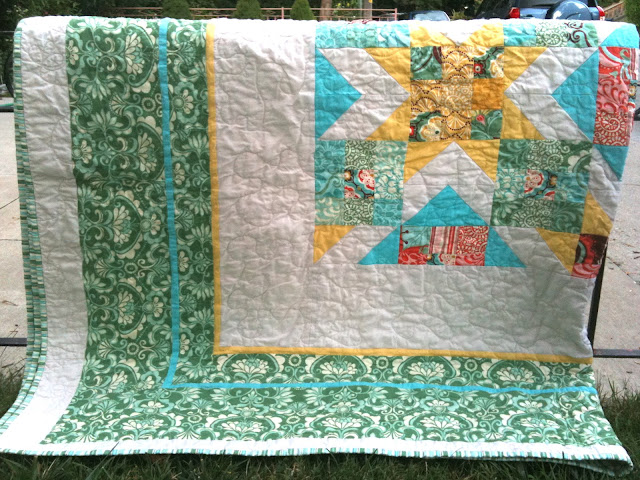 The FMQ shows up particularly well on the deep turquoise, but I was in such a rush to give this gift that I snapped my photos quickly -- and may not have quite captured the sweetness of the stitching. 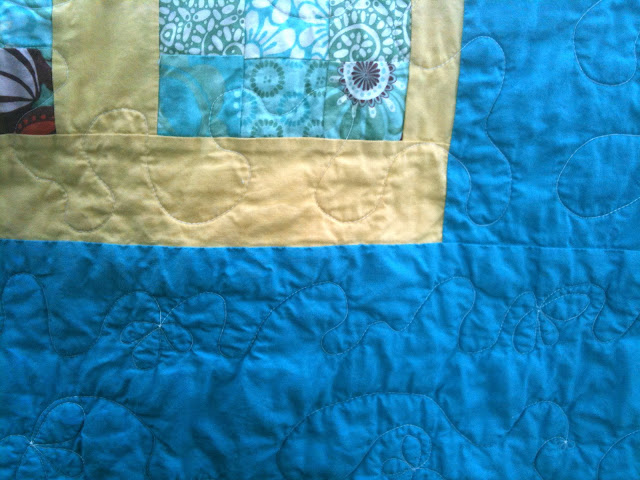 One down, two to go -- and I have to make the most of grading-free evenings in August!  I'm going to try to tackle the bed quilt for my little one next...especially now that the weather has cooled down a bit.  There's something about the end of summer that makes me feel like finishing things....
Posted by Prof. S (the enchanted bobbin) at 8:24 AM

I love the colours of this quilt and the border is gorgeous - wow - what a beautiful present for your mum, which reminds me that I have one to make for my own!

Thanks so much, Annabella! This was such a cheery quilt to work on -- it's interesting how colour can affect your mood! I'd love to see what you make for your mum :)

I'm thinking summer, summer, happy summer when I see your quilt. And the border is just perfect. Your mum must be thrilled :)

Mmmm, just lovely. Those skinny little borders, especially the turquoise one, really make it "pop". Love the colors int this. I'm sure your mother loves it too.

this is a beautiful quilt jennifer! i know your mum will LOVE it! i really love the quilting, especially the meandering flowers in the borders, so gorgeous! now please please help motivate me to get my quilt quilted in the next 3 weeks =P

I'm the lucky recipient of this beautiful quilt. What can I say? There's so much joy in receiving a gift that was made and designed particularly for you by someone you dearly love! I don't want to get mushy, but I feel that way.
I get pleasure from this every day and especially every night and I'll treasure it forever.

Thank you everyone --but a special thanks for my mama. The quilt may be my gift to her, but her ability to make me feel loved and appreciated are much more significant gifts that she gives to me :)